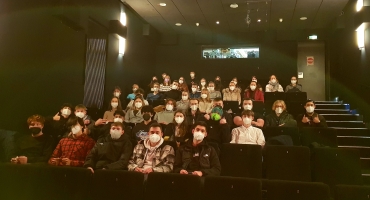 “Open your books on page….!” “Nope! Not today Ms Stierhof! Today we’re gonna watch a movie! Better go and grab some Popcorn instead!”

“Giant Little Ones succeeds when it chooses to treat youthful identity as open to shift with accumulated experience.” – The New York Times

“Lovely, funny and quite moving.” – Buzzfeed

“To be honest, I expected less than I got, which makes me incredibly happy. I thoroughly enjoyed the movie, especially because of its perfect reflection of what queer people must go through to be accepted, and most of all accept themselves. I liked the kind of humor along with the punchlines and the message that was delivered, that handled the problems and issues of our society really well. With the ‘not coming out’ of the main character they set an incredible example for those who are not really sure who they are or who they are attracted to by saying that you don’t have to label yourself as long as it feels right to you. All in all, I would recommend to watch it 100 %, same as I would watch it again.” (Bianca T, FW 13)

"I was simply amazed by the whole movie, the way it tells the story of a boy who’s losing his friends and himself due to a lie told by his best friend. But while working around the issue he’s making new friends that actually know what it’s like to be in his position and that support him with everything they got. Also, it’s nice to hear a tale about the still rampant and unfair hate directed against people of the LGBTQ-Community, which ends in the main character (or other characters) realizing that they don’t have to listen to any of them, but only to themselves. From start to end the film creates so many emotions that I honestly would have liked to just go up and either hug the protagonist or slap his so called ‘best friend’.”  (Linus R, FW 11B)

“‘Giant Little Ones’ is a great, and in some parts, really funny movie. It makes one think about society and its acceptance of people who are ‘different’. The cast was great in their roles and the message of the movie was delivered really well. I recommend everyone watches this movie.” (Alina C, FS 13)

“The film was well done, as it deals with the topic coming out and being gay, which unfortunately is still a controversial topic in today’s society. The film also invites the viewers to contemplate the topic and makes them deal with its controversy. The end of the movie was a bit abrupt and unexpected. In addition, it is an open ending, which means you don’t know how the story will end. Thus, it is up to the viewer’s imagination how he or she wants to finish the movie.” (Melanie F, FS 13)

“To be honest, the movie was quite interesting, it was great to see how the director handled the topic of finding oneself and same-sex relationships. One heart-rending thing was the reflection of the story of the main character, this felt so real that I thought about all queer people who must face such moments. After the movie ended I kind of felt bad because our society normalises straight relationships, but to be in a gay relationship is still seen as a problem or a sin. But I have to say, even if the story was sad and heart-breaking, I really love that someone shot a movie on these topics and that such a movie is shown to young adults who are still able to change our society’s standards. Because shunning, bullying and violence are normal nowadays and this must end.”  (Adrian N, FW 13)

“‘Giant little ones’ is a touching movie which has an important message especially for today’s generation: To not care about what others think and love who you want to without feeling bad about it. Personally, I think it has potential to encourage people in the audience who have trouble finding themselves, but it also shows the problem of our time which is not accepting things labelled ‘out of the norm’. All things considered it is a beautiful and entertaining movie.” (Elisa B, FW 13)

“The film in general was completely different from what I had expected personally, because it particularly showed the fragile and vulnerable sides of growing teenagers. I also found it very accurate and valuable how the movie didn’t judge any actions or reactions as wrong or a mistake. It carries a very meaningful message that people, especially teens, have to trust and believe in themselves. In my opinion, the movie should be recommended to people our age.” (Annie S, FS 13)

“This kind of movie is not what I would usually choose, but I still enjoyed watching this one. The only pity is that it has an open ending.” (Julia H, FW 11B)

“I personally, really enjoyed the movie ‘Little Giant Ones’ and I was impressed afterwards, because I expected the movie to be more boring. With a couple of scenes I was really touched emotionally and even got all teary-eyed. The movie spreads a strong message and shows what actually counts in life. If somebody asked me if the movie is worth watching, I would definitely answer with a huge YES. On a scale from 1-10, I would award a 8.5/10.” (Fabiola K, FW 13)

“‘Giant Little Ones’ is an emotional rollercoaster about love, teenage years and the struggles of finding out one’s sexuality. The movie shows how weird, confusing and hard it is to figure out sexuality realistically and represents serious issues that members of LGTBQIA+ community still have to face on a daily basis, as well as the issues of slut shaming and sexual harassment of women. All in all, it is a well-executed movie about finding out who you are.” (Dana M, FW 13)

“I was touched by the film because it approaches topics such as bullying, homophobia and insecurities, which teenagers nowadays must deal with. The movie shows that it is okay to make mistakes in life or to be different from the status quo and that people should never lose faith in themselves.”  (Hannah L, FS 13)

“The movie ‘Giant Little Ones’ was very nice, because it was very close to reality. It approached many everyday problems young people have to struggle with.

The theme of the film is especially important in today’s world and made the viewer think about it. On the whole, the film was very nice and well structured, only the ending was very abrupt and not quite understandable.” (Elisabeth T, FS 13)

“I really enjoyed this day and it definitely brought some variety to our daily school life. I would recommend doing it again.” (Janine R, FS 13)